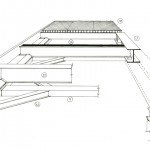 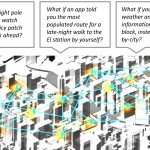 The ‘spirit of a place’ resides in its unique, distinctive aspects, cherished most by artists, writers, and the like. The spirit of a place is, very often, a time driven characteristic of space.

Gandhi Ashram carries a strong spirit, not just inside the buildings but also outside, and even under the trees. One may call it ‘Gandhian spirit’, as Hriday Kunj was Gandhi’s residence and the first building to come on this campus. It is almost the epicenter of the spirit. Later developments on the campus and around such as the khadi shop, schools, gruh-udhyog factories, all seem to carry this spirit. The later addition on this campus by architects Charles Correa – Gandhi Smarak Sangrahalaya, Nilkanth Chhaya – the toilet block, Yatin Pandya- Toilet, Café and more, have each been designed carefully, mindful of the spirit of this place, and in alignment with the most important characteristics – simplicity, truth of structure, honesty of materials, being ahead of its time, minimal.

One of the activities, most intimately connected with the spirit of this place, is Spinning and Weaving Khadi. With time this tradition seems to be vanishing from the city. This, despite the fact that there are many people from the older generations, who know weaving and do it often as part of their daily routine and are keen to transfer this tradition to the younger generations. Yet, they have been unable to do so perhaps, for the lack of a definite medium for knowledge transfer. In those days, weaving khadi was like meditation.

This suggests the program, of a weaving school. This school will not just be a place to learn and teach spinning and weaving khadi, but also one that produces saleable fabric to sustain itself. The design proposes addition of studios to learn spinning, weaving, sewing, designing, a space to sell, and additional informal spaces to exhibit.

All rights reserved.
To request permission to use or reproduce any of the content from CEPT Portfolio please contact portfolio@cept.ac.in.